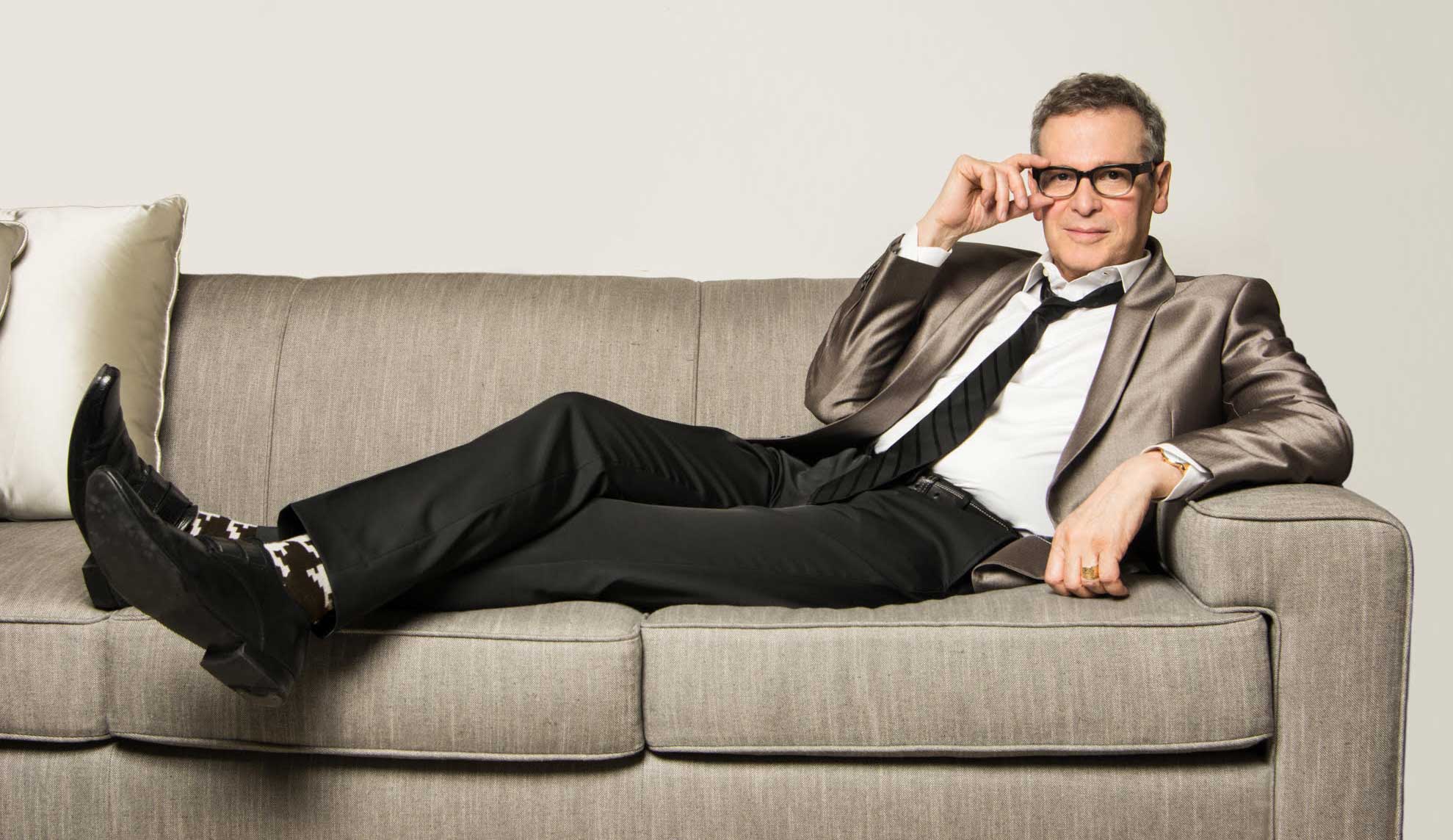 My series of interviews with creative icons continues with David Korins on ASPIRE DESIGN AND HOME.  I visit creative talents where they work and live to talk about what’s brought them to where they are in their careers.  Photographer Maura Sullivan captures it all in her own iconic black and white style.  The photos and interviews can be found on ASPIRE DESIGN AND HOME’s website. Read more below for more on how David Korins and I have worked together in the past.

I met David Korins through my other passion – theater. At the time, he was a twenty-something wunderkind running the set department at the Williamstown Theatre Festival. We had dinner one night and he was ruminating about a problem with a set that was just about to go into production. Overnight, he re-painted the entire set a monochromatic color. It was a big hit.

I was impressed by his boldness and his talent. Later I hired him to design the sets for an Off-Broadway show I was co-producing, Eve-olution, and a regional production of the musical Saint Heaven.

David has a knack for doing what only theater can achieve: he can suggest the time and place without being literal. That gives the theater-goer the license to expand their imagination in a way that no other medium does. He is also the master of “the big reveal,” which can be jaw-dropping.  Just when you think you’ve seen the extent of David’s set, it reveals even more and elevates the theatricality of the piece.  The experience can be breath-taking.

Since then, I have watched David’s career skyrocket as he has designed sets for Hamilton, Dear Evan Hansen, Beetlejuice, and the Broadway bound Mrs. Doubtfire.  Plus he’s created sets for many major rock concert shows including Kanye, Lady Gaga, Bruno Mars, and Sir Elton John.  Not to mention, the Academy Awards.

I was on the Board of The Edge Theater Company, that he founded with director Carolyn Cantor and was lucky to see his process – and the resulting productions – closely.  Some of my favorites were Orange Flower Water and Blackbird.

David and I can talk for hours and it was fun to shoot this in his office, which is full of sketches, models, and wonderful “weird stuff.”  David never stops creating, believing you’re only as good as your most recent work.  It’s a reason he’s the creative icon he is today.

Read my interview with David on ASPIRE DESIGN AND HOME here.

Creative icon Scott Bromley is next in my series of interviews on ASPIRE HOME AND DESIGN, where I talk with talented friends across industries about how they’ve made it.  It’s all documented in stunning black and white photos shot by Maura Sullivan.  The photos and interviews can be found on ASPIRE DESIGN AND HOME’s website.  Below talks more about how Scott and I know each other.

Scott Bromley is a legendary figure in New York. Just the fact that he designed Studio 54 would cement his place in history. There is not a single book or documentary about New York life in the 70’s that doesn’t feature Scott. He knew Warhol and everyone imaginable, and he was even photographed by Robert Mapplethorpe.

Scott is a great modernist architect and has designed over 60 homes on Fire Island alone.  He and his business partner, Jerry Caldari have run the gamut of projects from landmark buildings, restorations, and apartment buildings to a block-long rooftop farm in Long Island City.

For years, I knew of Scott and saw him around, but I was too in awe of him to approach him (ironic, because he’s one of the most approachable people I know).  Then, years ago, I joined the Designers Collaborative, a group of 12 designers with successful firms who share all of our professional information, as well as our personal issues. Scott is a founding member, and I was thrilled to be in his company.

Scott is a kind, thoughtful man, and he possesses a wealth of knowledge about architecture.  I never hesitate to call him or Jerry Caldari when I need advice.  Plus, Scott throws memorable parties – Valentine’s Day soirees and summer beach bashes at Fire Island Pines, just to mention a few.  And he makes a mean margarita, usually using something fresh from his garden.

It was so cool for me to sit and sketch with him in his office at Bromley Caldari for this photo shoot (did I mention that beyond his architectural drawings, he’s an amazing artist, too)?  Always an inspiration – I want to be Scott when I grow up – because Scott will never grow up.

Read my interview with Scott Bromley on ASPIRE DESIGN AND HOME here.

Creative connections and relationships inspire and fuel my own work, and they’re one of the reasons I thrive in New York City.  Over the next four weeks, ASPIRE DESIGN AND HOME’s website will feature my interviews with a variety of friends – some long-time relationships and some newer acquaintances.

We delve into what has made them icons or icons-in-the-making in their creative realms.  We chat about what inspires us and what are the biggest distractions that keep us from getting work done, to what time of day is most productive and what snacks need to be on hand.

Another brilliant friend, Maura Sullivan, a photographer who shoots on film using only natural light, captured these moments in black and white.  The photos and interviews can be found on ASPIRE DESIGN AND HOME’s website.

On the blog, I’ll be sharing more about our relationships.

I met John and his wife, Mary, about 10 years ago, when they hired me to design their new Manhattan apartment.

We clicked instantly and chatted for hours about literature, art, design, theater, and memories of our time at Harvard. Working together was a dream. The three of us shopped all over New York and journeyed to Boston on an art-buying trip.

People use the expression “Renaissance man” liberally, but John truly is one – actor, singer, writer, painter, illustrator (plus more that I’m not yet aware of, I’m sure).  I always look forward to our dinners or teas, and eagerly anticipate his yearly holiday card, which features his hand-drawn illustrations and clever greetings.

And of course, I enjoy his performances.  I’m always amazed that the man I know can disappear into role after role of wildly diverse characters – from favorites like Churchill on The Crown, the Trinity Killer on Dexter, and the wacky Dick Solomon on 3rd Rock from the Sun, to Bill Clinton, and the musical leads in Sweet Smell of Success and Dirty Rotten Scoundrels.  I can’t believe that the same gentle man I know can play both the evil Roger Ailes in Bombshell and the villain hanging off a cliff battling Sylvester Stallone. He was very touching playing himself in his one-man show, Stories by Heart, which he also wrote.

His New York Times best-selling illustrated book, Dumpty: The Age of Trump in Verse, showcases not only John’s artistic skills, but also his uncanny talent for assessing a situation with insightful razor-sharp wit.

John’s been recognized across industries with 6 Emmys, 2 Tonys, 2 Golden Globes, 3 SAG Awards, an American Comedy Award, 4 Drama Desks, plus nominations for 2 Oscars and 4 Grammys.  John has been inducted into the American Theater Hall of Fame and has a star on the Hollywood Walk of Fame (what else could you want?!).

I talked with creative icon John Lithgow in his dressing room at the Golden Theater on Broadway.  To read my interview with John, click here.